The Republic of Korea Institute of Ocean Science and Technology (KIOST, President: Hong Gi-hoon) hosted a ceremony to celebrate the opening of its Office of Promoting Relocation to Busan, which will pave the way the institute’s relocation to Busan. The ceremony took place at the Republic of Korea Maritime and Ocean University (KMOU) Lifelong Education Center, at 11 a.m., on January 31, 2015.

The Busan Relocation Office was created in order to strengthen the institute’s cooperation with the local community, including the Busan Metropolitan Government and KMOU, for the construction of a new research center in Busan to begin in May, and the institute’s relocation to Busan.

The Busan Relocation Office will also undertake the Argo research project, which was initially carried out in Ansan. Argo (Array for Real-Time Geostrophic Oceanography) is an unmanned automated device that measures the water temperature, salinity and flow of the ocean vertically from the ocean surface to a depth of approximately 700 meters. This data is then transmitted to an on-land base station via satellite. KIOST installed this equipment in the East Sea in 2001, and some 30 countries, with advanced oceanic science and technology, established the ‘Real-time monitoring of global sea water movement program’  to enhance their capability to forecast climate change.

The opening ceremony was attended by high profile figures, namely Kim Moo-sung, chairman of the Saenuri Party Supreme Council, Suh Byung-soo, mayor of Busan, and Park Han-il, chairman of the board at KIOST, reflecting great interest in the institute’s relocation to Busan. The ceremony was followed by a signboard hanging ceremony for the newly opened office and a briefing session on the construction of the new building in Busan. 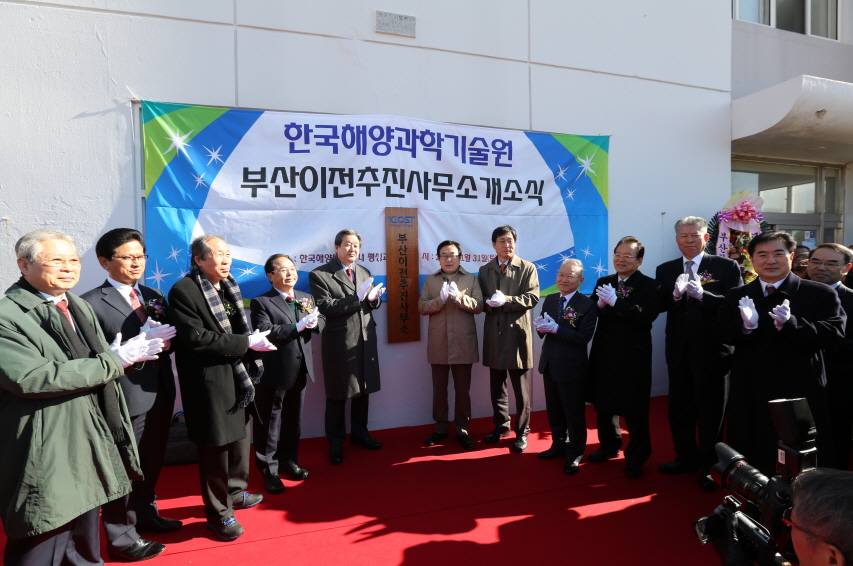