KORDI (president: Kang, Jung-geuk) has officially concluded a contract for marine plant technology 1)  transfer with the Mexican Petroleum Institute (IMP). Mexico is the world’s 10th-largest producer of petroleum. The signing ceremony was held at 17:00 on Tuesday, November 29th at KORDI’s Main Office in Ansan.

1) Marine facilities used to mine, produce, and transport petroleum or natural gas

※ IMP: Founded in 1965, the Mexican Petroleum Institute (IMP) is a research division of Mexico’s national petroleum company (PEMEX) that is devoted to studying petroleum and its basic and applied uses, adaptations of the petroleum technology field, and personnel training for the petroleum and petro-chemical industries. Its average annual budget is U.S. $285 million.

The main content of the agreement is to transfer to IMP the marine plant technology 2)  held by the Republic of Korea Marine Research and Development Institute. The total cost for the technology will reach U.S. $ 2,365,200.

The technology transfer was concluded at the aggressive request of IMP. The closing of the agreement was a result of efforts by each of the two countries to overcome their own limitations.

Mexico possesses huge oil and gas resources, but the power of United States and European capital, as well as the advanced technology of those countries, has caused it to suffer real drawbacks due to foreign dominance over its state-owned oil & gas wells. To counter this, Mexico began exploring possibilities for transferring technology from abroad.

While Republic of Korea's marine plant technology has achieved sizable dominance in the construction market, and in fact has also reached high levels in terms of core design technologies, the U.S. and European countries, thanks to their technological superiority, have limited the country’s entry into the established global market.

The transferred technology will enable Mexico to design and test the performance of major marine plant structures and mooring systems, which translates into a lower dependence on technologies from advanced countries, and an enhanced ability to guide technological development in Mexico's coasts, such as urgently-needed floating drilling and production systems.

The two organizations will promote technology transfer projects for the next three years, after which mutual business co-operation will continue for another seven years with plans to conduct long-term international collaboration in research and development. This is expected to further strengthen the partnership between the two countries in the field of oil, gas and marine plants. 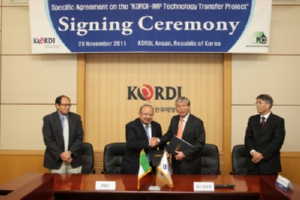 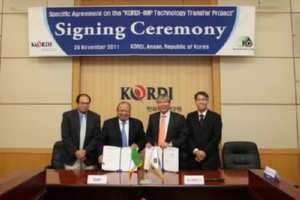 KORDI President Kang Jun-geuk shakes hands with Dr. Oscar Valle-Molina of IMP at the conclusion of the technology transfer agreement.