With cold snaps due to abnormal weather patterns sweeping across the nation, two theses analyzing the causes and process of temperature amplification were published by a joint research team of international and domestic scientists.

The research team led by Jong-Seong Kug of the Korea Institute of Ocean Science and Technology (President: Jung Keuk Kang) collaborated with Seoul National University, NASA and Tokyo University to identify the factors that caused climate change in the glacial period and the polar regions and established the causes of the new type of El Nino. The two theses were released in Nature Climate Change and Nature Geoscience, respectively.

The theses published on the same date (Jan 7 Korean Time) are of great significance in that they ascertain the mechanism responsible for the change in surface sea temperature, ocean currents and polar climate, which have the greatest impact on climate change, including global warming and abnormal temperatures.

“The role of mineral-dust aerosols in polar temperature amplification” authored by F. Lambert and J-S Kug of the Korea Institute of Ocean Science and Technology and the Seoul National University Research Team led by Professor Rok-Jin Park, and published in Nature Climate Change, suggests a new approach toward climate change in the polar regions.

The research team identified that during the glacial period dramatic increases in dust aerosols* led to a temperature decrease in the polar regions. Polar amplification between the glacial and interglacial periods was proportional to the change in the amount of atmospheric aerosols. They found out that aerosol particles had a significant impact on the climate of the polar regions by blocking solar radiation energy. 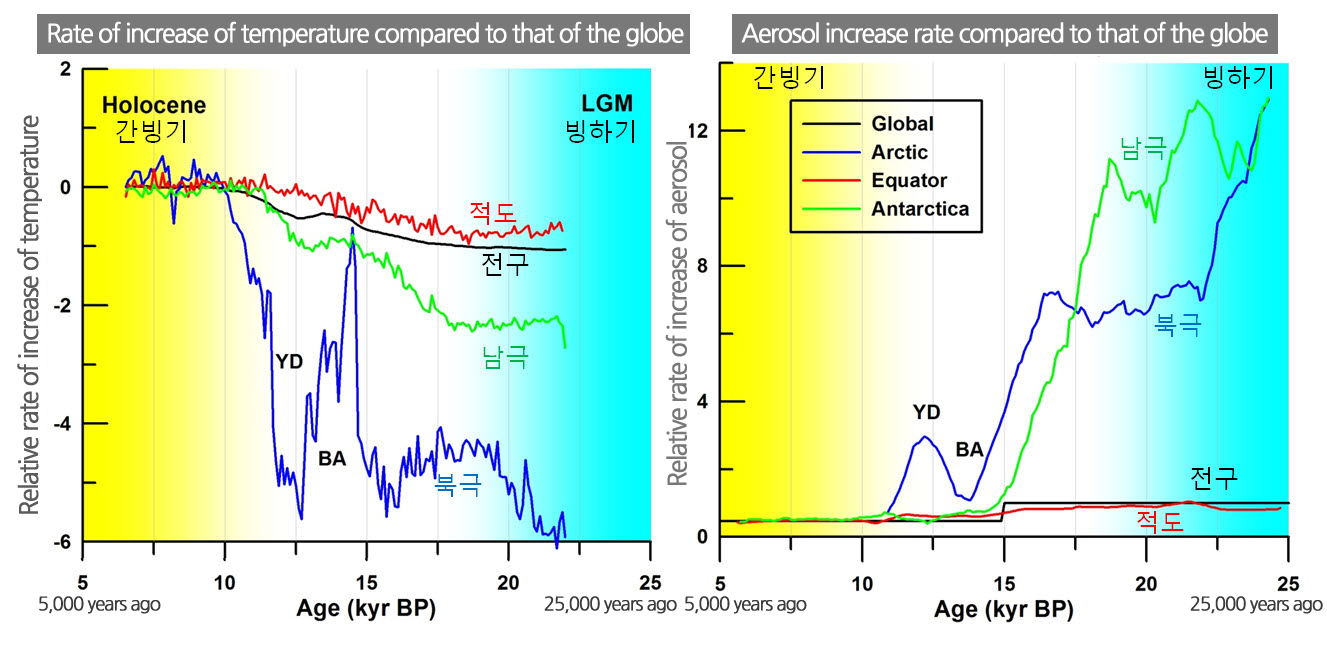 *Aerosols: An aerosol is a system of solid or liquid particles suspended in air.

Dr. Jong-Seong Kug said, “Changes in global temperature are generally more marked in high than in low latitudes. The arctic warming and reduction of sea ice caused by changing climate conditions in the polar regions are closely related to the severe cold wave these days.” He added, “Polar temperature amplification has not been fully explained despite many studies, including on the sea ice-albedo feedback mechanism*. However, the new approach through ‘aerosol ’will help us take one step closer to future predictions of climate change”.

*Sea Ice-albedo feedback mechanism: Albedo is defined as the reflecting power of a surface. As the albedo of sea ice is very high, it reflects most of the solar radiation. When sea ice decreases by global warming, the reduced albedo on the surface of the earth reinforces the absorption of solar energy. Warming tends to decrease ice cover and hence the albedo, increasing the amount of solar energy absorbed and accelerating warming in polar regions.

Meanwhile, the thesis jointly authored by the research team led by Kug, Yoo-Geun Ham of NASA and Fei-Fei Jin of Hawaii University and published in Nature Geoscience on the same date has also been attracting attention.

*Central Pacific El nino: Compared to the typical El Nino (East Pacific El Nino) it causes entirely different mid-latitude atmospheric variability. The research team at the Korea Institute of Ocean Science and Technology were the first to ascertain the co-relationship between the Central Pacific El nino and global warming and published a thesis in Nature in 2009.

The research team identified that the cooling temperatures of the tropical Atlantic Ocean in spring caused changes in vectors across the West Pacific and the development of the Central Pacific El Nino in the winter of the year. This finding was based on the analysis of changes in the sea surface temperature, dots and vectors of the tropical Pacific sea surface temperatures [See Figure2]. This research result is expected to drastically improve the prediction of Central El Nino closely associated with the global climate.

Dr. J-S Kug said, “The East Pacific and Central Pacific El Ninos are one of the key factors that have significant impact on the weather of the Korean Peninsula.” He also added, “Based on the co-relationship between the Central Pacific El Nino and the tropical Atlantic sea surface temperature, we will be able to better predict winter climate change on the Korean Peninsula by analyzing the temperature changes in the Atlantic ocean in spring”.