On June 16, it was announced that Dr. Ahn Hee-do, working at the Coastal Development and Ocean Energy Research Division at KIOST, won the 2014 JSCE International Contribution Award, presented by the Japan Society of Civil Engineers (JSCE).

The JSCE grants the JSCE International Contribution Awards to those who have made major contributions to the development of civil engineering and exchange among civil engineers around the world.

Dr. Ahn was recognized for his contribution to the promotion of technical and human exchange between Republic of Korea and Japan in the field of marine and coastal engineering. The awards ceremony was hosted as part of the JSCE General Assembly, which was held in celebration of the society’s centennial on June 13 in Tokyo.

An expert on coastal and harbor development, Dr. Ahn has been leading the research collaboration between KIOST and four research organizations in Japan, including the Port and Airport Research Institute (PARI) of the Japanese Ministry of Land, Infrastructure and Transport. Dr. Ahn has also translated a dozen or so Japanese academic publications, including To Survive Tsunami, into Korean.

Furthermore, Dr. Ahn has been an active member and speaker at a number of seminars, lectures, and conferences on coastal, marine, and port development organized in Japan, and contributed research articles to various journals in both Republic of Korea and Japan.

The JSCE, founded in 1914, has organized diverse programs this year in celebration of its 100th anniversary, and to promote academic and technical advancement in the area of civil engineering and architecture. The society is headquartered in Tokyo, with eight regional chapters and nine overseas branches, and actively promotes international exchange among civil engineers. 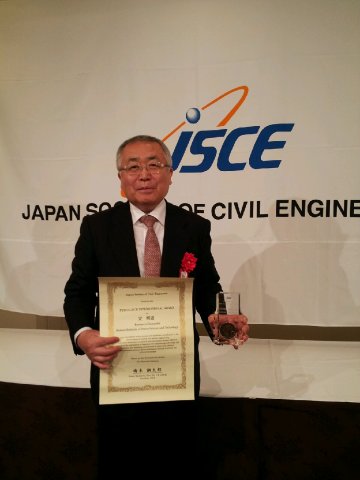