A glance of the healthy and beautiful Dokdo seabed

The Ministry of Oceans and Fisheries (Minister Lee Ju-young) announced the completion of the first Dokdo Underwater Ecology Map, which vividly shows the underwater landscape and ecological environment of Dokdo Island, such as the geography and types of fish in the waters around the island.

Since 2008, the Ministry has had the areas around Dokdo surveyed as part of the Basic Plan for the Sustainable Use of Dokdo, and has been working to create an ecology map of five areas with extraordinary underwater landscapes and diverse populations of fish. These five areas are Keungajebawi, Dongnimmunbawi, Haenyeobawi, Hokdomgul,[KHTS1]  and the coast of Dongdo.

This ecology map has been created through the use of sketches and illustrations of every type of marine plant and fish and their habitat that have been confirmed through the meticulous underwater research carried out by the Dokdo Exploration Team*.

In addition, the underwater landscapes of Keungajebawi, Dongnimmunbawi, and Haenyeobawi were named Window to the Sky, Door to Heaven, and Green Garden, respectively, to reflect the unique characteristics of the areas.

According to the ecology map of Keungajebawi and Dongnimmunbawi, the areas around Dokdo have maintained a healthy and beautiful landscape of sea oak* and sea trumpet**, which are concentrated around Ulleungdo Island and Dokdo, forming a luscious underwater forest, and there are schools of pearl-spot chromis, surfperch, and other types of fish swimming around.

* Type of marine plants that are about 1m tall. The joint connecting the stem and leaf is shaped like a V.

** Similar to sea oak in appearance, but the joint connecting the stem and leaf is straight.

The entrance to Hokdomgul, where hokdom (Asian sheepshead wrasse) come to rest when it gets dark, is located around 13 to 15m below the surface of the water. On the ceiling of the cave entrance, there is beautiful gorgonian coral, and on top of the cave, huge sea trumpets form a woody forest. 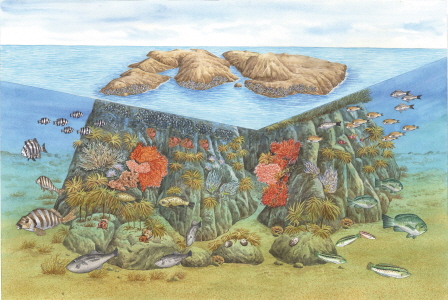 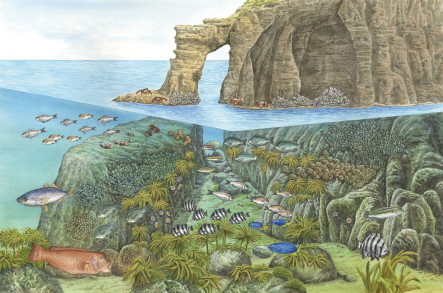 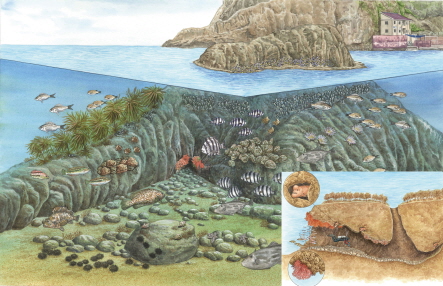 The coast of Dongdo and areas around Haenyeobawi have been exposed to human activity, such as the construction of docks and wharfs, yet they were found to be full of a diverse number of seasonal marine plants and young marine organisms, such as rudderfish and wrasses.

Therefore, the exploration and mapping of the ecology of Dokdo and its surrounding areas once again confirmed that Dokdo has significant ecological value as a habitat for a variety of organisms, and a high conservation value from geopolitical and environmental perspectives.

The data concerning the topography, species diversity, and habitat distribution in the areas around Dokdo that is provided in the Dokdo Underwater Ecology Map have been collected through detailed and systematic long-term research. It will be a useful resource for the comparison and measurement of the biodiversity and soundness of organisms in the waters of Ulleungdo and other areas in the future, and is expected to be widely used as baseline data for tracing the changes in marine ecology with climate change.

“This ecology map will serve as a textbook for monitoring and conserving the ecology and habitats of marine organisms around Dokdo,” said Director General Choi Wan-hyun of the Ministry of Oceans and Fisheries. “We are planning on distributing 60,000 copies of the ecology map to elementary schools and public libraries, and providing the map online through the Dokdo Information System (www.dokdo.re.kr) to inform people of the value of Dokdo as a treasure trove of marine life.”

Also, Dr. Myoung Jung-Goo of KIOST, who led the mapping of the underwater ecology of Dokdo, remarked, “We discovered three to four new species* of fish that had not been previously recorded in Republic of Korea. We have given presentations on these new species at academic symposiums in Republic of Korea and registered them as well.”

The Ministry of Oceans and Fisheries plans to create a 3D image map of Dokdo* and ecology maps for 11 other areas near Dokdo by 2017. These maps will be actively used in the preservation and management of the marine ecology of the waters around Dokdo.

* A detailed underwater topographic map overlaid with thousands of slides of underwater images.