Publication of Oceanography of the East Sea (Sea of Japan )

The recently published Oceanography of the East Sea (Japan Sea) encompasses all current oceanographic knowledge of the East Sea. Supervised by the Korean Society of Oceanography and published by world-famous Springer International Publishing, the book was written by 54 Korean ocean scientists, including 13 from the Korea Institute of Ocean Science and Technology (KIOST), and two Russian scientists, and edited by Professor Kyung-Il Chang of Seoul National University; Dr. Dong-Jin Kang, Dr. Se Jong-ju, and Dr. Sang Hoon Lee of KIOST; and Professor Emeritus Mark Wimbush of the University of Rhode Island in the U.S. 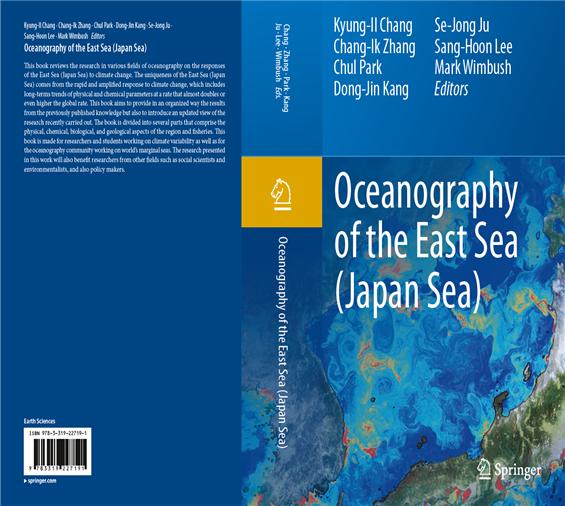 ▲ Book Cover
: A photograph of chlorophyll distribution in the East Sea taken by Korea’s Geostationary Ocean Color Imager (GOCI),
the first of its kind in the world

The book provides a well-organized overview of all previous academic research on the East Sea and is expected to significantly enhance understanding of the East Sea in terms of ocean science and promote the global use of “East Sea” as the English name of the marginal sea located between Korea and Japan. Furthermore, in the English title of the book, “Sea of Japan” is included in brackets after “East Sea,” which is expected to communicate to people around the world that the Sea of Japan is, in fact, the East Sea.