KIOST unveils secret of current circulation in the East Sea

The Korea Institute of Ocean Science and Technology (KIOST) announced that it has discovered the secret of the current circulation of the East Sea Intermediate Water.

The research team, led by Dr. Kang Sok-kuh (senior researcher) of KIOST and composed of professors Seung Young-ho and Park Jae-hun of Inha Univeristy and Professor Park Jong-jin of Kyungpook National University, discovered that the sea water current, which circulates in an anti-clockwise gyral circulation pattern along the isochore line at a depth of around 700 meters in the Japan Basin of the East Sea*, changes into smaller gyral circulation patterns independent from existing currents in the eastern side of the Japan Basin during the winter.

* The East Sea is composed of the Japan Basin, which is the largest and deepest part of the sea, and Ulleung Basin to the west and Yamato Basin to the east. 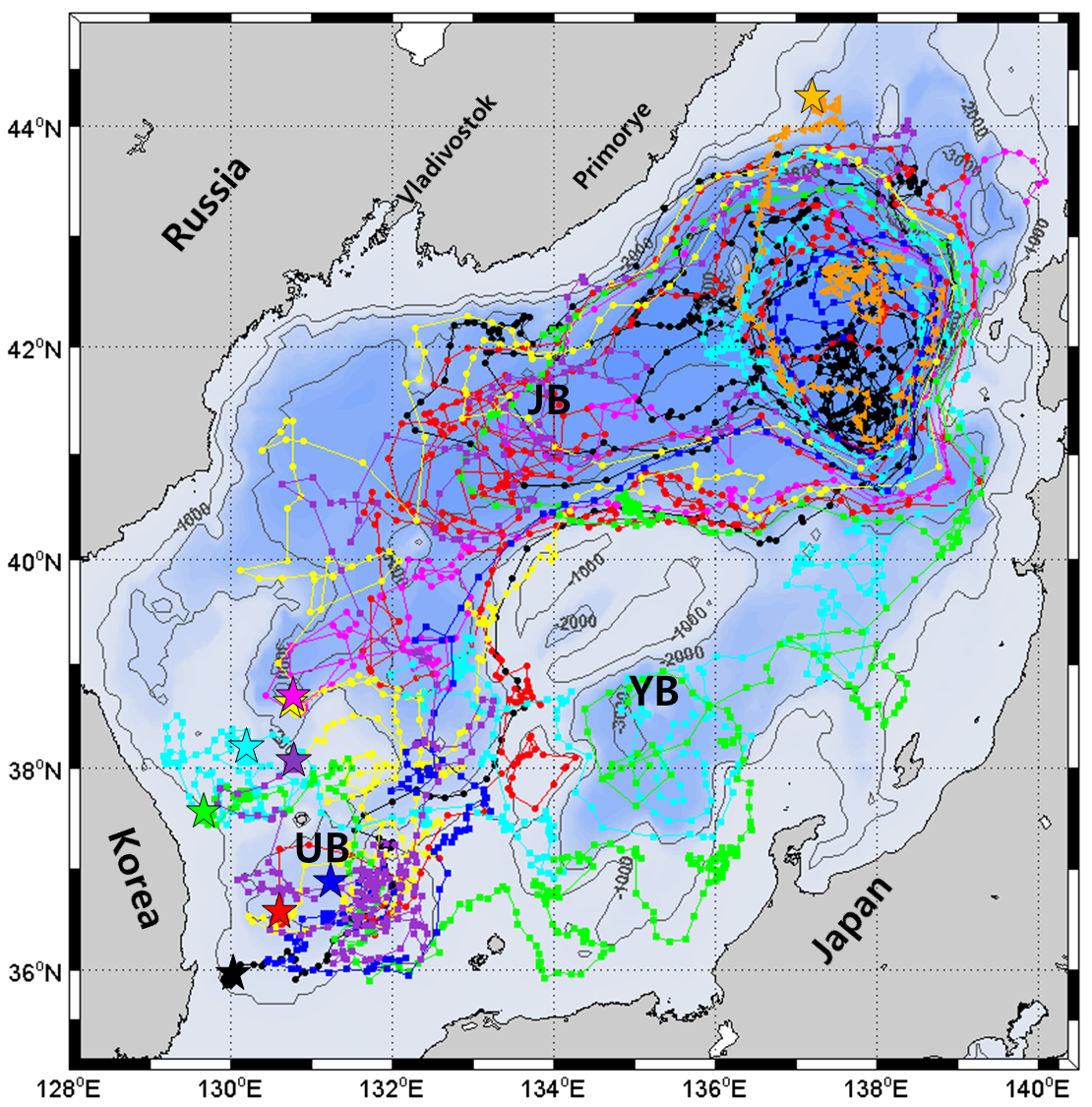 ▲ Launched in Ulleung Basin (UB), the Argo floats have moved not only to Ulleung Basin and Yamato Basin (YB) but also the Japan Basin (JB), which makes up 50% of the East Sea. The star marks the location of the launch, and the colored lines depict the trajectories of each float.

What is causing the formation of the independent gyral circulation patterns in the Japan Basin in winter is the strong northwesterly winds generated over Russia’s Primorsky Krai. The clockwise rotatory power of the northwesterly winds causes the surface of the sea water to submerge, while in deeper waters, they propel it toward deeper southern waters.

Based on the results of this research, experts anticipate that the increased occurrence of strong winter winds caused by climate change, such as the Arctic cold wave, will change the nature of the sea water flowing to the south from the Japan Basin of the East Sea, which will also have an impact on the ecosystem.

Over the past 13 years, the research team has tracked the trajectories of Argo floats**, which were deployed in the East Sea in 2002, using satellites, and their research results will form the basis of future research on the preservation of the marine environment.

** Argo float: A device used to measure the circulation, water temperature, and salinity of ocean currents at depths of 700 to 800 meters. The data collected from these devices are used as core data for the monitoring of global warming of the seas, rising sea-level, and ocean forecasting all over the world. As of March 2016, 34 countries are using around 4,000 Argo floats. In Korea, KIOST and the Korea Meteorological Administration (KMA) have deployed and are utilizing Argo floats in the East Sea, Northwest Pacific Ocean, and Antarctic Ocean.

Dr. Kang remarked, “An Argo float is an ocean observation device that moves along with the ocean current and periodically transmits observed data to satellites. It is particularly well-equipped to monitor seas with basins, such as the East Sea. Therefore, we must continue conducting research using Argo floats in the future.”

This research was conducted as part of two of KIOST’s major projects？“Research on Changes in Water Temperature and Ocean Currents in the East China Sea[” and “Research on the Practical Use of Technology to Forecast Typhoon Surges that Increase in a Global Warming Environment”？and was published in the March 2016 issue*** of the Journal of Physical Oceanography, a world-leading journal in ocean physics.